Hi, everybody! I've missed you so much while I've been on tour. And welcome wonderful new newsletter readers. It was so great meeting you out there! 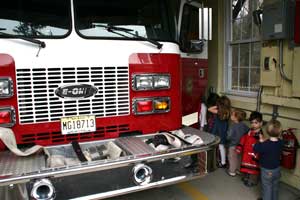 Before my son could talk, he already loved vehicles.There was this event called Touch-a-Truck, and every time my son would spot a digger or police car, we would promise him that he could see one up close "in July!" I share this with you a) because now my son is twelve, and don't the years pass quickly? And also because b) I can't believe my June newsletter is coming out...in July!

It's Been a Busy Two Months 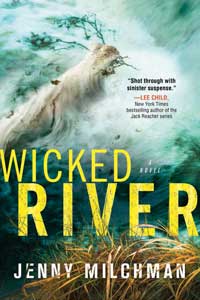 Wicked River, my wilderness thriller about a couple that goes on a backcountry honeymoon, came out May 1st. If you haven't read it already and want to, it was an Indie Next Pick and there's a good chance your local independent bookstore will have it. Barnes & Noble also chose it for their three-for-the-price-of-two display nationwide. (All over the country I was saying "two-for-three" and people would go, "Wait, what?") Finally, Amazon made it a Best Mystery of the Month, and also has it in their stores, which are something to see, if you live near one.

The Ups and Downs of Book Tour 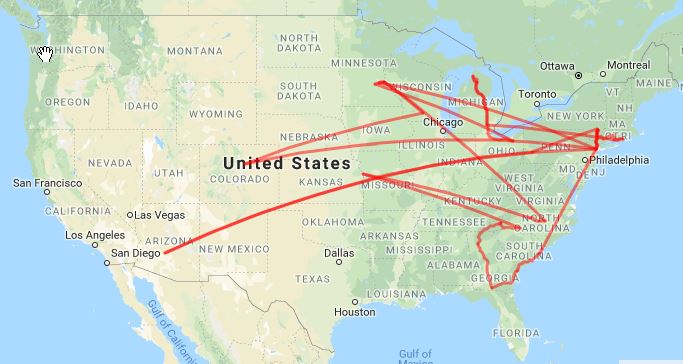 I'm going to highlight as many memories, bookstores and people over the next several issues as possible. If there's a mention I miss, please tell me! I might forget something because I didn't take a day off for 30 straight. But here's the thing. Every single one of those days was like a party.

When the book came out, my publisher sent me on a six week tour. You can't be away from home that long without there being ups and downs. Literal ones—I had to fly a lot, and some of you already know how I feel about flying. (Every time the plane moves, which is kind of a lot, I wonder, is that normal? Or is the pilot sitting in the cockpit drinking whiskey from a plastic cup and wondering how to tell us?) 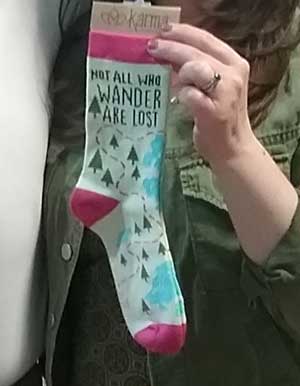 Also just plain—ha, ha, get it, PLANE—high points, like seeing Facebook friends become real at, say, FoxTale Book Shoppe in Woodstock, GA, The Raven in Lawrence, KS, and One More Page in Arlington, VA, or staying at the lovely Airbnb bookstore of a member of the DorothyL listserv that first saw me get published. A reunion at the Poisoned Pen with readers and friends, one of whom gave me a ride back to my hotel, and one who brought me the coolest pair of socks (if you think socks can't be cool, check these out). Phoenix has a sweet shop that figured out how to line a milkshake cup with hot fudge. Mind. Blown.

But there was also exhaustion. After the Pen, I got stuck in the airport. Not for an hour or two or five, but for the entire day, after which the flight was ultimately cancelled. (I thanked the crew for keeping us on the ground. Yes, I did. To everyone who grumbled, I said, "What? You wanted them to discover this weird air flow thingie WHEN WE WERE IN THE AIR? Doesn't air flow seem like the kind of thing a plane, uh, NEEDS?")

Still, getting to my event the next morning at Mystery Lovers Bookshop was starting to seem iffy, until my publicist and travel coordinator went to work, late on a Friday night, and found a red eye to Atlanta and a connection on to Pittsburgh. So I went to my hotel, set an alarm and slept for two hours, then traveled through the air and the night, two flights instead of one. AND YOU KNOW HOW I FEEL ABOUT FLYING. And then, since I was going to be sleepy, my publisher sent a limo to the airport.

Highs and lows. But mostly highs. 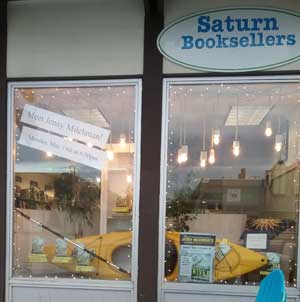 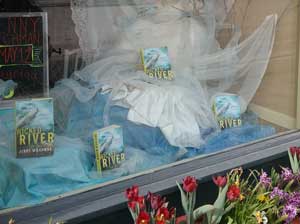 There were window displays built around Wicked River—a kayak with a real tree at Saturn Books in Gaylord! a wedding dress at McLean & Eakin in Petsokey!—and events where treats were served and bubbly was popped. Luncheons and dinners where I actually ate (I never eat at book events)--Litchfield Books, this means you.

I told the story behind the story of Wicked River. Did you know I originally set out on a backcountry honeymoon of my own? It was supposed to last three weeks. We made it one day. The marriage, though, that's still going strong. Thanks, honey, for holding down the fort while I traveled!

There are events still coming up—the Up All Night tour, New York to Denver, with three of my fellow Sourcebooks authors, plus the Decatur Book Festival and Bouchercon—so if I'm coming anywhere near you, please join me. Seeing some of you in person was one of the very best parts.

The Struggle and Juggle 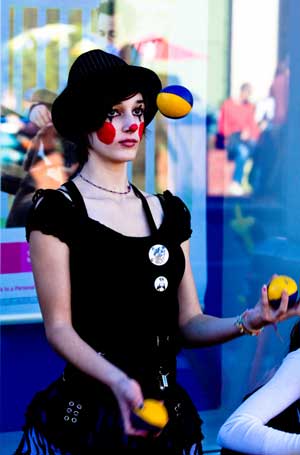 I wrote about this dilemma for Career Authors. I'm so grateful for the opportunities that have come my way with the release—to have a publisher that is so behind the book and so incredibly supportive of me.

But there's also a dilemma, and that's how to give as much to my family as I want to and they need. I have kids, and in the past we were lucky enough to all pile in the car—husband working from the front seat—and go on what Shelf Awareness called the World's Longest Book Tour.

Now the kids are older, and have busy schedules of their own. Which means that when I tour, I have to leave them behind. How far is it reasonable to go in pursuit of a dream? Am I sending my kids a positive message about working hard toward a goal, one that will hopefully help them achieve their own passions? Or am I letting them down each time I leave?

So, What's Happening with the Movie?

The film version of As Night Falls is in pre-production. This week, I met the screenwriter so we could plan our CraftFest offering at ThrillerFest. If you're interested in How a Book Becomes a Movie, and fancy a few days in the Big Apple, consider signing up and meeting me and Matthew Quinn Martin for some Hollywood instruction. 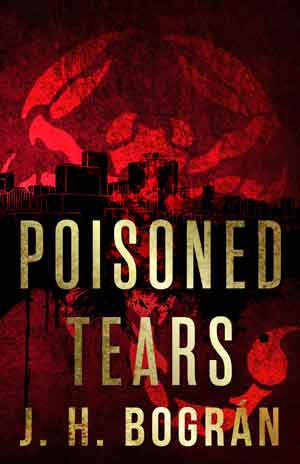 Please welcome J.H. Bográn to the Spotlight with his latest book, Poisoned Tears

One of the most difficult battles in my writing career has been the language barrier. Spanish was, and remains, my native language. The American Dream has reached outside North American borders, and I wanted to become a writer with a publisher in New York City. I figured all I had to do was write in English. A simple plan, right?

At nineteen, I was blessed with a job where I had to speak and write in English. Then there was the reading. Every early customer presented me with books. That’s when I discovered Robert Ludlum, Tom Clancy, Ken Follett and Clive Cussler. I got proficient, and people kept telling me I was good at speaking too. Match that praise with the desire to put ideas in writing and you have a recipe for publishing dreams.

I started my first novel in 1998 and made the rookie mistake of showing it to people who cared for me and didn’t want to break my heart. I can’t help but wonder if someone who disliked me would have helped me improve faster.

The very best thing I’ve done is investing in the Merriam-Webster and Oxford English dictionaries.

The second thing that helped me improve has been the support of native speakers willing to go through hell correcting the typos that would spring out of nowhere as they tried to navigate my stories.

I have writing friends who show me mistakes and help me make corrections. I will not claim I am master of the language, but one of those friends claims she can now concentrate more on plot or character development than grammar mistakes. And although the wars on Oxford comma and splitting infinitives still rage on, at least the difference between irony and coincidence is no longer a mystery to me. 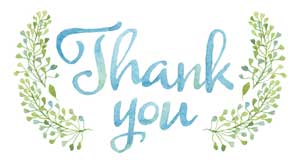 My publisher and publicity team for organizing the Get Wicked tour. I got to walk into bookstores where every chair was filled and the booksellers had to drag in extras. (Awesome book club, Towne Book Center!) At one, I signed copies till my hand ached (Go, Bethany Beach Bookstore!) Tickets sold out at Girls Night Out at Sparta Books!

Reviewers at the Big Thrill, AP, Suspense Magazine, Bookreporter, the Strand, and the Providence Journal.

Book bloggers—one of whom, Suzy Approved, came out to my event at RJ Julia!

But mostly, to all of you dear, beloved readers.

I have this dream where I spot someone at the beach (or a grocery store or Target, since I don't get to beaches very often, um, except for when my publisher sent me to this wicked cool inn) and she or he is reading my book. So I walk back and forth until the person looks up, then looks down at my author photo, puts it together, and asks if I wrote the book. Or has me arrested for stalking.

Nothing is ever sure in this crazy business. Well, maybe just one thing. It gives me a bolt of joy to connect with all of you, hearing that my heroine's strength in the book made you feel like you could tackle some demons of your own. Or, you know, caused you to vow never to go outside again. That's good too.

These stories I write? They're for you.