I don’t know why ThrillerFest reminds me of Superman. It’s more like summer camp for writers, media, and industry folk. A place we return to each July to hang out, talk shop, and catch each other up on everything that’s gone on since last year. This writing thing can be hard for people to really understand. So having one giant group where everyone gets it is a pretty heady experience.

Here are a few of my personal highlights from TFest XIII:

In keeping with our superhero theme…

New York to Denver in a Not-So-Single Bound 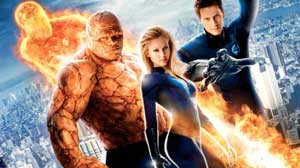 After the conference, I took a car to an airport hotel courtesy of my fan-freaking-tastic publisher so I could fly to Minnesota the next morning. You all already know how I feel about flying, so I won’t go into that particular miracle of physics again.

This was for the Up All Night Tour: four Sourcebooks authors who keep you up all night with their thrillers. We did book events at Once Upon a Crime, Chapter2Books, and Mystery to Me. We also stayed at glam places like the Elephant Walk B&B where they served us a three course Thai-inspired breakfast, and the Red Hotel in Madison where we got upgraded to suites that were three times the size of my first apartment. Then we flew on to Denver for an event at The Tattered Cover, where they’d created special coffee drinks in their café to honor our books and keep attendees up all night!

Murder to the Metal 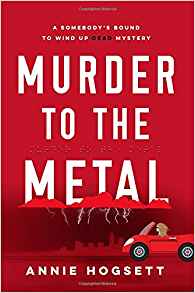 I met Annie Hogsett when she came to my event at The Learned Owl in Hudson, OH during the Get Wicked tour. Great seeing you, Annie! Annie's latest book, Murder to the Metal, is in our Spotlight this month. She answers the Question Writers Get Asked Most.

Readers ask me, “Where did you get the idea for your novel?” My answer? “Dave’s Supermarket.” This is true. I was pulling out of the McDonald’s across from Dave’s when somebody honked. At a blind man. In the street. A voice-in-my-head said, “You know you live in a rough neighborhood when somebody honks at a blind man in the crosswalk.”

The voice, as it turned out, was about to belong to Allie Harper: sassy, broke, part-time-under-licensed librarian and first-person protagonist of TOO LUCKY TO LIVE, the first of my Somebody’s Bound to Wind Up Dead Mysteries. The blind man was Tom Bennington: hot, handsome, associate professor of English literature. In Tom’s grocery bag at that fateful moment of kismet and disaster, was a winning $550 million MondoMegaJackpot ticket he’d bought to prove to a kid that gambling doesn’t pay. Oops. Allie and Tom fell, almost simultaneously, into love and danger. And after that, it was all money, mayhem, multiple murders, and romance. In Cleveland.

You Know You’re an Old Fogey When… 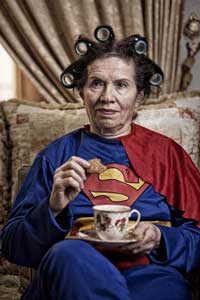 Definitely departing from superhero status here. But you know I keep things real with you guys, so here’s what happened. I got this text from the aforementioned screenwriter of the movie to say that the executive producer of said movie was inviting me to meet the actor who’s almost-nearly-hopefully locked in as the lead. This person—whom I can’t name just yet—was doing a show in New York City. At ten o’clock. (That’s p.m. for any other old fogeys out there who would naturally assume everyone’s asleep by then.)

Now, don’t get me wrong. I only wrote the book the film is based on and I’m not exactly Hollywood material myself. (Argue with me, argue with me! Say, Of course you could be a movie star, Jenny. Even though you’re five feet tall, and as we’ve just established, old).

Anyhoo, I immediately acknowledged the cool factor of this, not least that I was invited to meet such an amazing, talented person.

But then I got a little whiny. I was all, “Ten is past my bedtime. Do they have a matinee instead?”

It was an amazing show and I’m super glad I went. And it was also the strangest thing. I rarely write physical descriptions of the people in my books, and there’s no description of this character in As Night Falls. But the actor looks exactly like the image I had in mind the whole time I was writing.

Maybe I should switch from Superman to The Twilight Zone now.

What I’m Up To, plus…a Sneak Peek at My Next Novel! 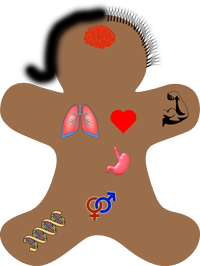 Last week, I taught a workshop called “Crafting Bad Guys from the Inside Out: a psychological approach to building your villain” at New Jersey’s biggest mystery conference, Deadly Ink. Check out this cute little guy who I think should do for gingerbread men what Stephen King’s IT did for clowns. We used him as part of an interactive exercise in the workshop.

Right after that, I left for Maine to celebrate a really big birthday for my mom.

Many of you know that my novels are set in the fictional Adirondack town of Wedeskyull. But my fifth book takes a departure—literally. Opening in Wedeskyull, the main character then leaves to accept a teaching post on a remote island eight miles out to sea. It’s a stranger-comes-to-town novel where it turns out that the town is strange.

Can’t wait to write you all again after I get back!