It's only been two weeks, but I've been on tenterhooks waiting to share a few things with you!

(What are tenterhooks anyway? Seems like a word a writer should know).

Anyhoo...in this issue we have:

So, come on, let's get started! [cue Mr. Rogers' voice after he's changed into his sweater] [and please don't notice how I've dated myself]

We're Getting a New Deal for Christmas

Late in December, I was in New York having a cup of coffee—OK, it was tea, but that sounds so fine-grand-ladies—with one of my favorite authors and mentors, MJ Rose, when my agent began wildly conducting calls with editors and shooting texts my way.

By the end of the day, I had signed a deal with Sourcebooks for my new novel, Wicked River. The title owes a debt to another of my favorites—reviewer and author, Kevin Tipple—and is about a couple that goes on a back-country honeymoon only to discover the worst the wilderness has to offer--and the worst inside themselves. So that's the where, the what, and the when.

Why did I choose Sourcebooks? That's a question that has to do with this tumultuous age in publishing, my penchant for bookstores, and the role of money in a writer's life—although not in the way you're probably thinking. (As an aside, this fascinating article explains why writers should talk more openly about money). You'll be able to read more about my choice in future editions of this letter and in a series of posts called “Deal Diary,” which will appear on International Thriller Writers’ debut blog, The Thrill Begins, starting next January. But some of the most confidential, inside details will appear on a site called...

Self-publishing sensation-turned-Houghton-Mifflin-Harcourt-author JD Barker sympathized with me as I hung out there without a home for my work. He told me about Patreon, a site where content creators can connect with fans.

In the year and a half since As Night Falls came out, I've been getting a lot of emails. People asking for my next book, or at least new work of mine—and I had some! Deleted scenes, short stories, a novella-in-progress, novels that could be serialized. Also, I love to advise writers about the biz, read queries, offer feedback on manuscripts, and help in getting published. But I'd begun receiving too many of these requests to give each one the time it deserved.

Patreon allows me to connect with readers and writers in an ongoing way. If it works, it will mean I can earn a living between books or if a dry patch hits again. (And if you're an author, Patreon is worth checking out—it may suggest a path to independence for you as well.)

Our first Spotlight shines on Christina Baker Kline, who wrote one of this decade's biggest hits and has just released an equally stunning follow-up, taking us deep into the life behind a painting that many of us have seen, but never really known till now. 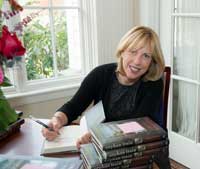 I was born in Cambridge, England, and spent my early years in a nearby village called Swaffham Bulbeck, in a house built in the thirteenth century. When you stood in the living room, you could see the outline of what had once been the hole in the roof above the space where the original inhabitants built fires. There was no refrigerator or central heating; we used an icebox and a small gas heater that required coins. Several years later we moved to Tennessee and lived on an abandoned farm, in an unheated house that had only recently been wired for electricity. 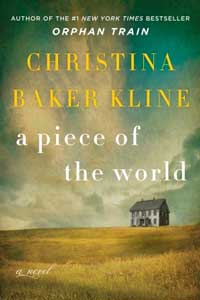 Eventually we moved to Maine, into a house with basic amenities. But we spent weekends, holidays, and summers at a camp my father built on a tiny island with an outdoor pump, gas lanterns and candles, a fireplace for warmth, and an outhouse. We snow-shoed across the frozen lake in winter and chipped ice from the door to get inside. My sisters and I would huddle in our coats around the hearth.

I’m grateful to my parents for teaching their four daughters that living close to the elements can make you more attuned not only to the world around you, but to the world within. And in my last two novels, Orphan Train and now A Piece of the World, I’ve drawn from those early experiences to create characters who live simply, without the modern-day amenities that most of us have come to expect.

Check out Christina's A Piece of the World page for lots more about this exquisite book.

No, this isn't a movie deal announcement—though there could be one at some point; please keep your fingers crossed! But I did have a brush with the big very, very small screen recently. My husband, AKA the guy who does a lot of this stuff, AKA the Man Behind the Curtain, AKA the Wizard—decided to make a short film of my recent ups and downs, to kick off Patreon.

This was a homegrown effort to say the least—our boom mike was a Swiffer pole, and my daughter was gaffer while my son was best boy electric: 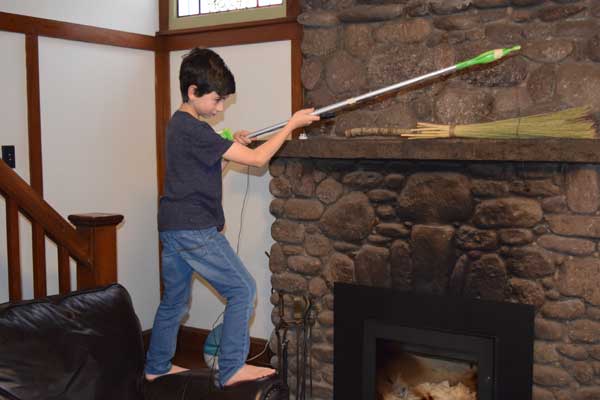 Awww! He is the best boy. At the same time, I think the film captures something about this crazy industry, my love for nature and animals, and my day-to-day life. You can watch it here.

Did you read Cover of Snow? 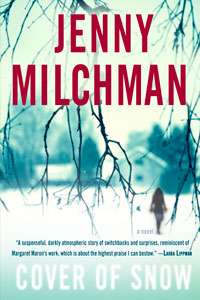 Not many people know this, but my debut novel totaled twenty-two drafts, and once upon a time there was a prologue. This was cut, and now I can never read it without tearing up. Not because it was cut—that was the right call, for the prologue contains a big ole spoiler—but because it's just so darn sad.

For those of you who have read the book, you will get to meet Brendan at a much younger age, on the day that his life changed forever—and which laid the path for the story to come. The unpublished prologue to Cover of Snow is my giveaway to newsletter readers just for looking at my Patreon page. (Which, I have to repeat, is brand-new, and which I'm nervous about, so I hope this is a good bribe, um, incentive!)

In months to come, I'll be sharing updates about my forthcoming book—what it's like to change publishers, the fourth novel stage of this crazy career, a cover reveal, and the biggie: To Go or Not To Go (on another world's longest book tour).

Plus, there will be authors in the Spotlight, news from my fictional town of Wedeskyull (here's a slideshow to get you started), industry tidbits and ways to succeed as a writer, book club picks, and a bunch of stuff I can't even conceive of yet.

Stay warm this winter, and please stay connected too! I never want to go this long without talking to you all again.