I Saw London, I Saw France, & Then I Saw a Movie

Not the movie based on my third novel, As Night Falls—although there is news about that, which hopefully I’ll be able to share soon—but one I urge you to go see or stream or however the young folks watch movies these days.

It’s called Strange But True, and the book by John Searles was one of my favorite reads the year it came out. The film, just released from Lionsgate and starring Greg Kinnear and Blythe Danner, with a standout performance by Brian Cox, plus that kid you’ve seen in a bunch of stuff lately, is that rare beast belonging to this phylum:

I realize phylum may not be the right word, but it sounds smart and I wanted to use it.

What unites those three? They are all films where the movie is as good as the book. And yes, I recognize that two of the three are by Stephen King. (‘Stand By Me’ is based on the novella, The Body). That’s ’cause SK is a genius. Rob Reiner, please come out of retirement and read my next release!

Hey, so what about that next release, Jenny?

Houston, We Have a Title

Those of you who read my work know that setting—the fictional town of Wedeskyull—and nature—in the form of snow, wilderness, and outdoor adventure-turned-ugly—play a big role. My titles reflect this, but when it came time to decide what to call my next novel, my brilliant editor brilliantly pointed out something brilliant.

My team had been meeting behind-the-scenes at the publishing house, and their analysis noted that while character, psychology, and human relationships loom at least as large as setting or nature in my books, my titles haven’t reflected these elements.

In my next newsletter, I will share the title for my fifth book, which drops…drumroll please…on July 7th, 2020.

Wait, So Did You Go to France?

I did, on a working vacay where my computer, um, completely freaking died, and I had to write till the middle of the night on French AND American time to meet my deadline. (It's sooo hard to be a writer. Ha. Not. It's the best flipping job there is.)

There I learned that the French have less of two things and more of one than we Americans. Yet they look fit and spry and healthy even into visibly old age! There are probably a coupla other differences too, but these stood out (make whatever conclusions you like about me based on that; you will probably be correct).

Here’s the story of our trip in pictures: 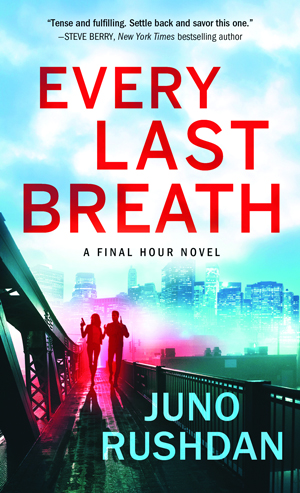 This month's Author in the Spotlight is Juno Rushdan , a fellow SB author!

From Service Before Self to a Romantic Thriller Series

I enlisted in the U.S. Army at seventeen, passing up a full scholarship to Syracuse University. My family was horrified. I went through airborne school and did multiple deployments to Panama and Honduras for counter-narcotics missions. After finishing my bachelor’s degree at The Ohio State University, I became an Air Force intelligence officer. Assigned to four different Combatant Commands, I’ve spent fifteen years supporting special forces and poring over chemical, biological, radiological, nuclear, and high-yield explosive (CBRN) threat assessments.

The first book in my Final Hour series, EVERY LAST BREATH, features covert operative Maddox Kinkade. She is tasked to neutralize a lethal bioweapon and must recruit the last person she ever expected to see again: her presumed-dead former lover. Cole Matthews can’t forget or forgive her role in a tragedy that ruined his life, but the two form a strained alliance to prevent a crisis. Soon they’re set on a deadly collision course with a world-class killer who has a secret that could end everything.

Hey, Didn’t You Used to Hate to Fly? 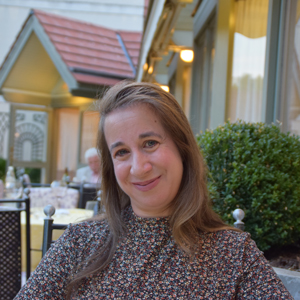 I’ve been thinking about moments when our identity has to shift. See, I did and do dislike flying, it freaks me the heck out, and no matter how many times you say Bernoulli’s Principle, I’ll still ask how those things stay up in the air. But that picture to the left is me JUST BEFORE I HAD TO GET ON A PLANE. I look smiley, right?

Last year my publisher sent me on a seven week tour, which involved a lot of flying. Even though I had three published books, had won a couple of awards, received praise from the New York Times—you know, good stuff—I started thinking, Pinocchio-like, Hey, could it be that I’m a real author now?

Being a writer was a lifelong dream, so secret and unspoken, I didn’t even think it, let alone say it aloud. And Real Authors have to do scary things, like fly, and grapple with trying to speak to readers, some of whom will hate what we say or how we say it. Write a book that we can be proud of, maybe even leave something behind.

That what’s I’m doing now. Grappling. While trying to make sure my next book is worthy of you, my friends, and newsletter subscribers, and readers.

What makes you feel proud? I’d love to hear about it.