In More Ways Than One 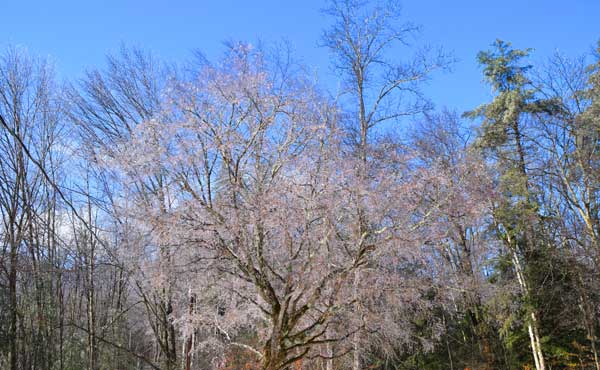 This letter is going out later than I’d hoped for two reasons.

First, until today the land around me was enrobed in ice, which made for internet wonkiness and also some stunning natural phenomena. Branches that tinkled when the wind struck them, like orbs on a chandelier. Mountains cocooned in white. And a Japanese maple that looked as if Swarovski himself had come to decorate it—thousands of tiny gem-like lights in all the colors of the rainbow. This picture doesn’t do it justice—I knew that as fast as the sun could shift, the sight would be left to memory.

Our world is changing. If I talk for five minutes with my kids and their friends, I see that the issues preoccupying them are ones I knew little of at their age—though they were always there—and that the problems weighing on them are pressing. So many things must be addressed, righted, fixed. My children’s generation impresses me with its capacity for empathy and depth. I strive to learn from their lead.

Last time I wrote you, my new book was done. Now it’s really Done—as in, according to my new agent and her team—and represents an even bigger departure than I'd realized. Where this book will take me, I don’t know. But somewhere different seems guaranteed. 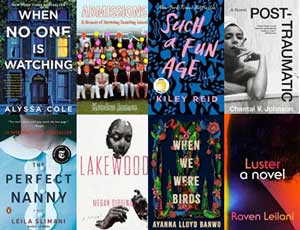 I contributed this list for Rogue Women Writers this month. It’s filled with books more than worth a read—and which may represent a change for you in terms of finding a new author or genre.

Crime fiction buffs, did you know about this?

The Eleanor Taylor Bland grant is administered annually by Sisters in Crime. Eleanor Taylor Bland was a pioneer in crime fiction. In 1992 her first novel, Dead Time, featured Marti MacAlister, an African American female police detective. You can learn more about Taylor’s life and work, as well as the award established in her honor, and right now I am thrilled to introduce you to two recent recipients of this prestigious distinction!

Mia P. Manansala is a writer and certified book coach from Chicago. She uses humor (and murder) to explore aspects of the Filipino diaspora, queerness, and her millennial love for pop culture. 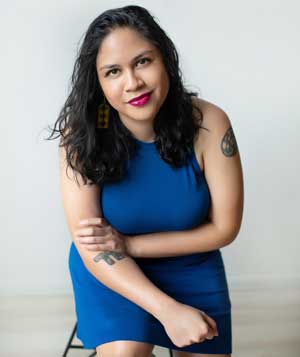 Please share a line or two about your award-winning book!

My ETBA award-winning book, which went on to become my debut novel, Arsenic and Adobo, is a Filipino American culinary cozy mystery.

Was writing always the dream, and can you tell us how it came to be for you?

In 2015, I was feeling stagnant and decided it was time to stop dabbling and actually finish a story. I took my first writing class (taught by past SinC president, Lori Rader-Day) and that was the beginning of my career as a mystery writer.

How did you learn you’d won the Eleanor Taylor Bland award?

I received an email from Beth Wasson, the executive director for SinC at the time. The subject line said, "Dear Mia," so opening it up was one heck of a surprise! At the time, I'd been receiving nothing but rejections for my first book, so receiving this award gave me the confidence I needed to keep going.

Yasmin Angoe is a first-generation Ghanaian American author of the debut novel Her Name is Knight. A former English teacher, Yasmin currently works as a developmental editor. When not writing or editing, she can be found watching movies, engrossed in a new audiobook, or obsessing about the fact that she probably should be writing.

Please share a line or two about your award-winning book!

Nena Knight is an elite Ghanaian assassin set on a course of revenge against the men who invaded her home and killed her family.

Was writing always the dream, and can you tell us how it came to be for you?

It came about from my loneliness. I had a single mom who worked a lot, so writing and reading became my babysitter and my siblings. If I'm not writing, I'm thinking about writing. It never leaves me.

How did you learn you were in the running for the Eleanor Taylor Bland award?

I didn't know I was in the running until I read the email that said I'd won. The moment felt surreal because I usually don't win anything. For a while I thought it was a hoax, and then that they'd gotten the decision wrong. But winning the Eleanor Taylor Bland award was one of the best and most important moments of my writing career.

Congratulation to both these authors, whose books I hope you will discover. Spread the word to writers who might want to apply for this award!

Rogue Reads this month is a doozie!

It features, Mia Manansala, one of our award winners showcased above! Also, after Lee Child’s Reacher, Gregg Hurwitz’s X is my favorite can-kill-a-baddie-with-his-bare-hands-and-a-tool-or-two character, and I get to interview him—Gregg, not X or Reacher—on February 28th, along with two more stellar authors. Be one of the first 100 to register and get the chance to ask a question of any author in the lineup. Hope to meet you for an evening “out”!

Until next time, both as we are, and in each new version of ourselves, love from the Hills of Wedeskyull,